Skip to content
HomeBolgThe man-tree has undergone 16 operations. Doctors are of good cheer

Tree man has undergone 16 surgeries. Doctors are of good cheer

Abdul Bajandar from Bangladesh, also called by the media as the Tree Man, underwent 16 surgeries and got rid of almost five kilograms of growths. Doctors say he was cured of a bizarre condition that caused tree bark-like warts to appear on his body.

After 16 operations and the removal of nearly five kilogramsóIn a growth made of palms and stóp, doctors at a hospital in Bangladesh’s capital Dhaka are of good cheer. They hope the disease will no longer wróci. According to Samanta Lal Sen, a plastic surgeon, the operation carried out on Bajandar is the „milestone in medicine”.

The case of Bajandar and his ilk is a medical phenomenon. An extremely rare disease sk is responsible for the occurrence of wood-like growthsóry – Lewandowsky's dysplasia-Lutz (Epidermodysplasia verruciformis). The ailment was first mentioned in 1922 in the pages of a Berlin magazine "Archiv für Dermatologie und Syphilis". It is likely to be caused by HPV (Human Papilloma Virus). The virus may not give any signs, but with a favorable genetic predisposition, the patient may develop tree bark-like growths.

The condition has a genetic basis. The scaly warts resembling tree bark, also called „The horns of the skórnymi” most often appear on the hands and feet, although it is also sometimes found all over the body. The disease devastates the body and does not allow it to function independently. 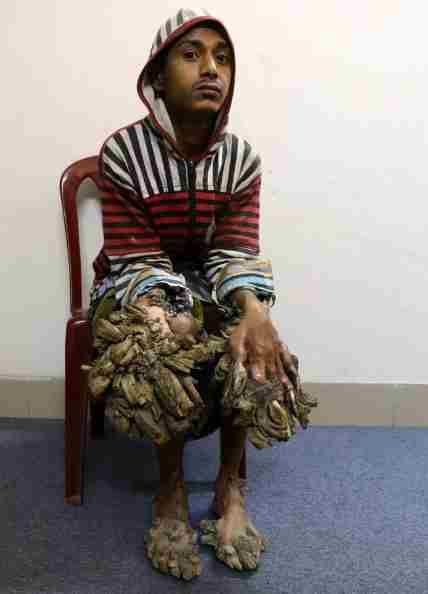 Bajandar did not pay anything for the operation. Doctors have agreed to operate without charge, but they are not entirely sure that the warts will not grow back. If tumors stop appearing, Bajandar will be the first person cured of Lewandowsky's-Lutz dysplasia.

The patient is satisfied with the resultóin an operation. – I never thought I would ever be able to hold my baby in my arms again – said a happy Byandar. – Now I feel much better. I can hold my córka on their knees and play with it. Can’t wait to get home – added.